Analysis of informal payments in the health sector in Slovakia 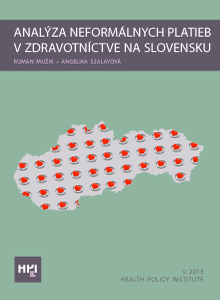 The goal of this study was to identify on the basis of survey the specific indicators of occurrence, exhibition and causes of informal payments in health care based on which will be possible to propose measurements, which will contribute to a more transparent health sector. The survey was unique in the fact that it concentrates on experience and did not rely on an opinion or emotional, subjective perception of people. Moreover, the survey was unique in its methodology which comprised of the collection of data by means of online Internet tools.

The research involved approximately 1,200 respondents. The demographic profile (the ratio of men to women, age structure, education and region) does not correspond to the demographic structure of the population of the Slovak Republic (SR), hence the outcomes of this survey cannot be deemed from the statistical perspective as representative. However, they have an unquestionable qualitative informational value.

According to the survey as much as 71.4% of respondents (843 out of 1,181 respondents) gave an informal payment in any form, where as much as 18.5% (approximately each fifth respondent) encountered a demand corruption. Under the term demand corruption we include any type of payment which was not given by the patient arbitrarily or with the aim of bribing somebody but such a payment was (in)directly demanded by the physician.

Respondents mention as the most frequent reason an expression of gratitude (31.4%). Furthermore respondents were giving informal payments in order to get a better treatment (26.8%), to get the services as soon as possible so they do not have to wait (15.3%), in order to get to a highly qualified specialist (15.2%) or as a matter of principle that it is a custom and a matter of decorum (11.4%). Out of other reasons which were stated in more than 5% of cases was displayed a worry that the respondent can get at least some treatment or they wanted to hospitalize a relative or they needed a sick leave.

The most spread type of expressing gratitude is chocolate boxes or other candies (52%), then alcohol (21%) and flowers (11%). As for surgeons, gynecologists and orthopedists the gratitude payments and cash payments accounted for up to 333 euros (approximately 10 000 SKK).

On the basis of these findings we proposed measurements which could contribute towards decreasing the presence of informal payments in health care:

The study in Slovak language can be download for free here.