Watch the seventh lecture from 8 lectures course running under the title „Innovation for better healthcare” at University for modern Slovakia. In this lecture, Peter Pažitný and Tomáš Szalay talk about a partnership network, innovation in payment mechanisms and innovative project of managed health care “Plan MEDIPARTNER”, which started in Slovakia in 2012. The lecture video includes English subtitles. Transcript together with the all schemas can be found under the video.

1. What we have learned during the previous 6 lectures?

We have learned that:

All these claims are being merged in the Plan MEDIPARTNER, the first real health insurance product in Slovakia.

3. What is the Plan MEDIPARTNER?

4. What is the network of healthcare providers?

Healthcare providers are not grouped according to ownership, but based on their common interest:

5. How does the principle of demand direction operate in the partnership network?

Scheme 1: The principle of demand direction of the partnership network 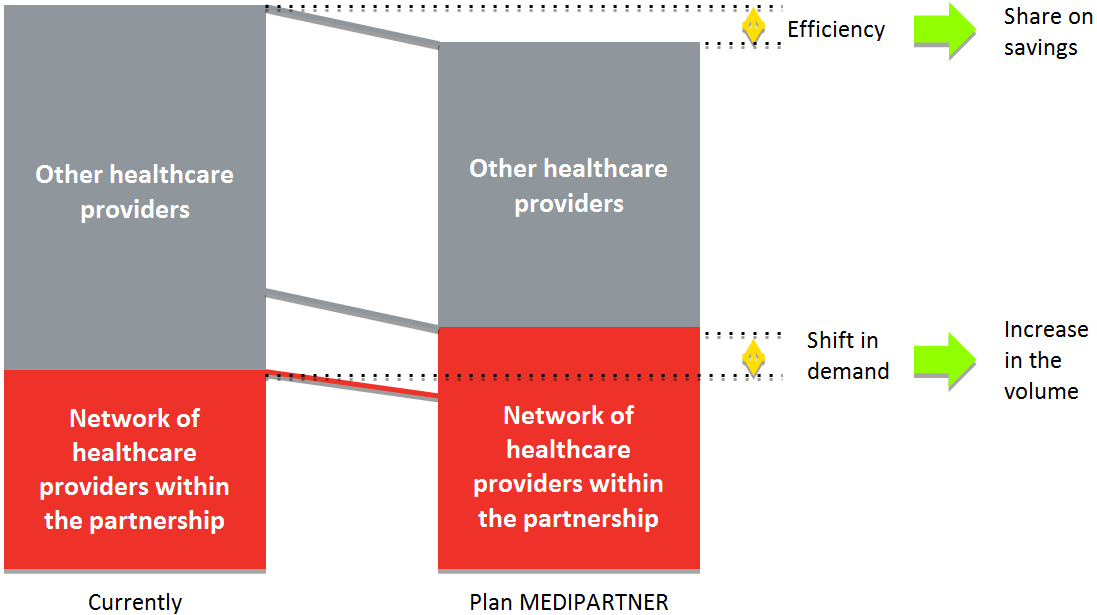 6. What is the demand direction based on?

Demand direction must be beneficial both for healthcare providers within the partnership as well as for the insured:

7. What is the Plan MEDIPARTNER financed from?

In order to make this comparison precise, three conditions have to be fulfilled:

8. How does the full risk capitation work in the Plan MEDIPARTNER?

General practitioners, who are members of the Plan MEDIPARTNER, take over some of the functions of the health insurance company. They take over the responsibility for part of the costs that are meant for healthcare services provided. With other words, they start to bear the risk, which under normal circumstances bears the health insurance company.

Scheme 2: The VAS Fund and the Fund of the Plan

If they were not participating in the Plan, their income would be dependable from the number of insured in the providers‘ card register multiplied by the monthly capitation unit, disregarding how good or bad are the patients treated or how much they cost the health insurance company.

Costs for the insured are ten times higher than the benefit for the general practitioner. The main idea of the Plan MEDIPARTNER is therefore: to provide doctors the responsibility for the costs on medicines, laboratory treatments, specialists’s visits or hospitalization. And if they manage to achieve some savings – by fulfilling all lega artis procedures, i.e. in compliance with modern clinical knowledge – they receive part of the savings reimbursed as an additional reward to the capitation.

Therefore, general practitioners get a virtual financial fund at their disposal, out of which the treatment of their patients is paid. The amount of the sources in the fund is calculated based on the morbidity of their capitated patients. Doctors with a sicker group of insured have therefore more resources at their disposal than doctors with healthier insured.

9. How does spreading of risk work?

Doctors in the Plan bear the risk for situations, when costs for their group of insured will be for some reason too high. They are protected for such risks by dividing risk among each other, i.e. among more doctors. They create a solidarity group. Based on experiences, if a group of doctors takes care of more than 20.000 insured, accidental fluctuations cannot destabilize costs for these insured for more than 0.5 percent.

General practitioners in the Plan within the VAS Fund bear only a limited risk – for instance for medicines, which are not bound on a specialist, in case of specialized ambulatory care they only bear the costs for treatments up to 15 € per visit, in case of hospitalization up to 120 € per case and 30 € for each day spent at the hospital. Then a stop-loss situation occurs – additional costs are borne by the Fund of the Plan, in which two hospitals are grouped. If the risks were too high for them as well, it would be taken over by the health insurance company.

10. How does this mechanism work in practice?

Contracted capitation for doctors in the Plan MEDIPARTNER is increased by 30%. However, doctors do not get these 30% reimbursed immediately. This reimbursement is conditioned by achieving savings – whether the group achieves savings is evaluated continuously, but in the accounting it is finalized only once a year.

Until then, resources for this increased capitation are accumulated, which is called in the Plan MEDIPARTNER as withholdings. These resources are stored like in a notary subsidy, detained until the year-end closing.

And so it is even more complicated, the withholdings do not contain only the resources for the additional 30% of capitation, but 35% of the capitation. Thus, the doctor enters the Plan in a way that he/she receives 5% less resources than until now. In the worse situation, doctors in the Plan would receive less than those doctors, who are not part of the Plan. However, the threat of not receiving the 5% of capitation forces him/her to activity.

A similar experience has been discovered in the 70s by two economists Amos Tversky and Daniel Kahneman. They called it „loss aversion“, meaning „fear of loss“. People have a conscious resistance towards losses, which is higher than satisfaction made by profits. The behavioral economist Dan Ariely writes about such and other psychological phenomenon influencing economics in a very interesting way, whose book „Predictably Irrational“, I highly recommend you.

If costs for an average insured in the Plan MEDIPARTNER are lower than in the reference group, the group achieved savings and the withholdings are paid to the doctors. Other resources are divided based on merits – i.e. according to, which doctor contributed to the result of the group mostly.

If savings are higher than the amount of withholdings, doctors get a claim for bonus capitation. This makes one third of the additional savings. One third is received by the health insurance company and one third serves for securing costs in the next accounting period of the Plan.

Disclaimer:         Peter Pažitný, Tomáš Szalay, Angelika Szalayová and Tomáš Macháček are owners of Klient PRO SK, which administers the Plan MEDIPARTNER in a partnership with the Dôvera Health Insurance Company.